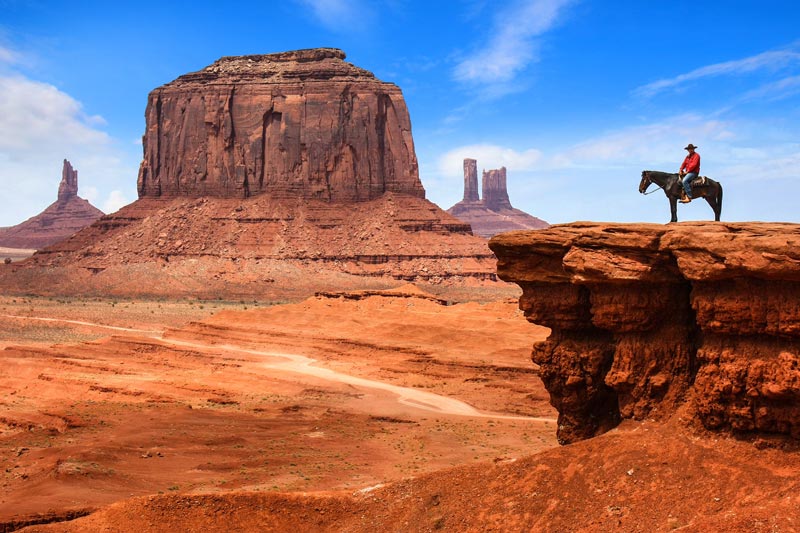 Thanks to Harry Goulding and John Ford, a famous Hollywood director, who made Navajo Nation a familiar backdrop of the American Western genre, Monument Valley has been graced by many memorable and big cinematic productions.

It does not mean that Monument Valley is only for dusty and gritty cowboy movies. The scenic plateau has been a part of several contemporary action films, science-fiction flicks, and comedy scripts. The local tour guides at Goulding’s Resort & Tours will share plenty of interesting facts about the famous movie shoots. During a tour, they will show you the trails and paths where John Ford shot many of his films.

Let’s dive into a few of the details to find out which movies have their memorable scenes filmed here. Remember this list is only a small sample of the many films that have used a Monument Valley as a backdrop.

Another Ford-directed masterpiece that starred Henry Fonda. The movie was said to use Tombstone, Arizona as the main setting, which is 500 miles from Monument Valley. The rocky cliffs and iconic landscape of Monument Valley perfectly complemented the plot and its characters.

The movie was the collaboration of John Wayne and John Ford and used a vegetable storehouse at Goulding’s Resort & Tours as headquarters of one of its lead characters Captain Brittle. The storehouse is now part of the Goulding’s Museum.

Dennis Hopper’s Easy Rider is one of the few cinematic drama films that portrayed dreary details of Monument Valley’s scenic locations. The brilliantly shot movie convincingly showed the dawn and dusk when Peter Fonda and Dennis Hopper cruised into the Navajo landscape on motorcycles and spent the night there.

National Lampoon’s vacation portrayed a perfect family comedy when Chevy Chase and his brood were lost in Monument Valley’s deserted land. The family vacation turns into the endless catastrophic journey when they venture through the robust and mysterious plateaus of Monument Valley. The movie is an undeniably great way to explore the beauty of this breathtakingly beautiful landscape.

Speaking of science fiction film, you can’t get a better example than Back to the Future Part III. Monument Valley cliffs are perfectly used to show the Southwest when Marty goes back in time to showcase the Old West.

This movie is a classic example of modern fiction and is way different from formula movies. Tom Hanks played the main role, who after three years of coast-to-coast run, stops in Monument Valley. The director, Robert Zemeckis, has beautifully captured the unbelievably beautiful sunsets and dusky evening with his professional gear. You can even visit the area that he stops running known as Forrest Gump Point.

A modern retelling of the classic radio series of the Lone Ranger and his sidekick Tonto. Stars Armie Hammer and Johnny Depp bring this story to life. A majority of the film used Monument Valley as it’s background. And this Disney movie received two Oscar nominations for Best Visual Effects and Best Makeup and Hairstyling. There is even an homage to John Ford with passengers singing his favorite hymn used in at least five movies.

Learn how Harry Goulding brought Monument Valley and Hollywood together.

You can see all of these exciting movie locations when you stay with us at Goulding’s Resort & Tours in Monument Valley, call 866-313-9769 today or book your room online!